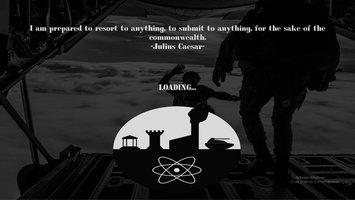 I am excited to launch and present to you the new update for The Age of Politics entitled The new Beginning.

Let's see first the change log and after I will explain everything in detail.

V0.3.0 The new Beginning:
-A new era( the egyptian era, set between 1 and 500 AD);
-A new game Story updated for the change;
-2 new manual saving slots were added, now it has 4 manual and one auto;
-Added photos to the loading screen. These are in relation with the quote;
-Bug fixed, loaded games, days remained before the next attack fixed;
-Changed the era advancement texts;

So, firstly, the new game will bring you to ancient Egypt, not Rome as the previous versions. Why you may ask...Well...because I wanted to expand the game's lore and introducing a new era seems the best way to do this.

Speaking of lore, I updated the story of the mighty Edrenad Empire( the empire which you command), going to the roots of the kingdom. It all started in the Lybia( I know it is written Libya, but this is not a documentary game), when the kingdom( it wasn't empire at that time) conquersthe Egyptian Empire. That act isn't well viewed by the Roman empire, so the war with them starts. In 500, the Edrenad kingdom becomes an empire, conquering the last parts of the Roman Empire( as in the original story).

Other grand changes weren't made. I added two more manual saving slots, added photos to the loading screen. These are in relation with the quote( a demonstrative image is above) and some bug fixes.

Enjoy the update and

Get The Age of Politics

The Age of Politics

Build an empire, beat your enemy, conquer the universe